A couple of months ago I was in York and passed the window front of one of the larger watch/jewellery retailers. As usual, my pace slowed and my eyes automatically scanned the window for anything interesting. On this occasion my orbits were arrested by two things; a flash of gold and a red sale sticker! The former turned out to be Chopard’s very attractive LUC One GMT (ref 1943) and the latter indicated a price reduction from the thick end of £18k down to the £13k range!

Now, I don’t know about you, but when those kind of figures are bandied about on a pretty serious bit of horological kit they are not lightly ignored! This, coupled with the fact that I was in the market for a GMT piece in gold (after selling my Rolex GMT 2 last year), the proposition was turning more interesting. All that said, the price was still a fair sum and as such I wondered if I could really be cheeky and see if that was the “very best” deal. After all I was an existing customer and knew a senior member of staff in the Group! So, whilst I was outside still gawping at the watch and ticket – and I might add fearing that a staff member had made a blunder with the figures, I made a call. After some pleasantries I explained why I was calling. Well, the answer was; “I will look into it. Go inside and await for me to call the manager” Well, the upshot was a little more off was possible. Surprised? Well frankly yes as my request was extreme and speculative, but I have always believed in the phrase “if you you don’t ask” etc. Now, these folks know I do a bit of writing and so I agreed that if I reviewed the watch I would not reveal exactly what I paid, but, suffice to say it was now a no-brainer!! Obviously the original discount was common knowledge so there was no embargo on that!!

So, what has my impertinence secured me? Well, firstly, in terms of timeline, the LUC GMT One was in fact launched in 2016, with stainless steel and rose gold cased versions. Secondly, it is an impressive demonstration of haute horlogerie from an old and well-respected manufacture. But let us start with initial visual impressions. Firstly, the watch certainly has presence – mainly due to the gold colour and size.  Secondly, this is closely followed by the impressive dial features and colour of the same – plus further intrigue offered by the two crowns.

Turning to the case first, this is 42mm x 11.71mm in size and here fashioned in 18ct rose gold. The top surfaces of the bezel and lugs are mirror polished, with the case sides finished with fine vertical brushing. The lugs are quite simple and modest in size and beautifully flow from the case. There are two fairly meaty crowns at 2 and 4 o’clock the upper one sports the LUC logo and operates the hands, date and manual winding (if required). The lower crown sports a globe, indicating that this operates the second time zone function. At this point I would just say that this shape of crown is my favourite (aesthetically and practically), and am not a great fan of tapering or onion types – although I do possess a few examples! The case back is of the exhibition type – in this instance with a large window surrounded by a tapering gold bezel  and so looking for all the world like a porthole. This is secured by six recessed micro flat-headed screws. Usual information is engraved on the bezel. Non-reflective sapphire glass is used. Some 50m of waterproofing is offered.

Moving to the dial, this is split into two segments: The main central dial deals with local time and a rotatable outer ring indicates the second time zone. The main dial has an outer track interspersed by Arabic numerals at 12, 3 and 9. The numeral 6 is sacrificed for the date window, which has a white background and black numerals.  In between are “teardrop” shaped lumed indexes. The main dial has a brushed sunburst finish that emanates from the script area. As to colour, I would describe it as a bronzed brown – although Chopard simply call it “galvanic brown” which is a bit vague as the former word is simply the technique used to apply the colour ions to a metal dial – a form of electroplating if you will. It is attractive and shimmers in different lights. The outer track is the same colour, but as this has no brushing, appears a little different. The main dial hour and minute hands are in gold and are sword shaped with white lume infilling. The second hand is a gold needle. Turning to the GMT ring, this displays 24 hour numerals. It is split in half to show a day/night indication and this is simply done with 7-18 hrs in silver and 19-6 hrs in the same bronzed brown. A pointer hand is employed here – also in gold with a triangular lumed tip. Incidentally, all the lumed aspects are very effective at night. Overall, the entire dial is attractive and shows information pretty clearly.

I would note at this point that there are of course a number of really nice GMT watches out there, but many of these have no date function which I find somewhat incongruous. Yes, great, you can tell the time in two time zones but still be oblivious to the date!

Regarding the movement, this is the quality in-house automatic calibre 01.10 – L comprising of some 262 parts including 31 jewels. It’s heart beats at 28hz and offers a very useful power reserve of 60 hours. The calibre is also COSC rated so one can be confident of super accuracy. As one might expect, there is some nice decoration present, with the rotor, plates and bridges having mainly Cotes de Geneve and with brushing backing this up. The rotor is full sized, but oddly for a premium watch appears not to be gold and so slightly reduces the rear “wow” factor!

Lastly, the package is completed by a fairly robust alligator strap on a chunky gold pin buckle. The former is of a dark chocolate colour and is a good contrast to the gold.  The buckle nicely takes cues from the case, with polished and brushed surfaces.

I have now had the watch for a couple of months and I have been enjoying it. Yes, it is a fairly large and weighty piece, but despite this does wear well (and is comfortable) on my average-sized wrist. The fact that the height is not too excessive I think also aids the sensation that the watch is not too big. The watch clearly exudes quality, but without being unduly flashy, and the bronzy brown dial works well with the rose gold. Functionality is also very good and quite simple. Lastly, the strap size and colour compliments all this. 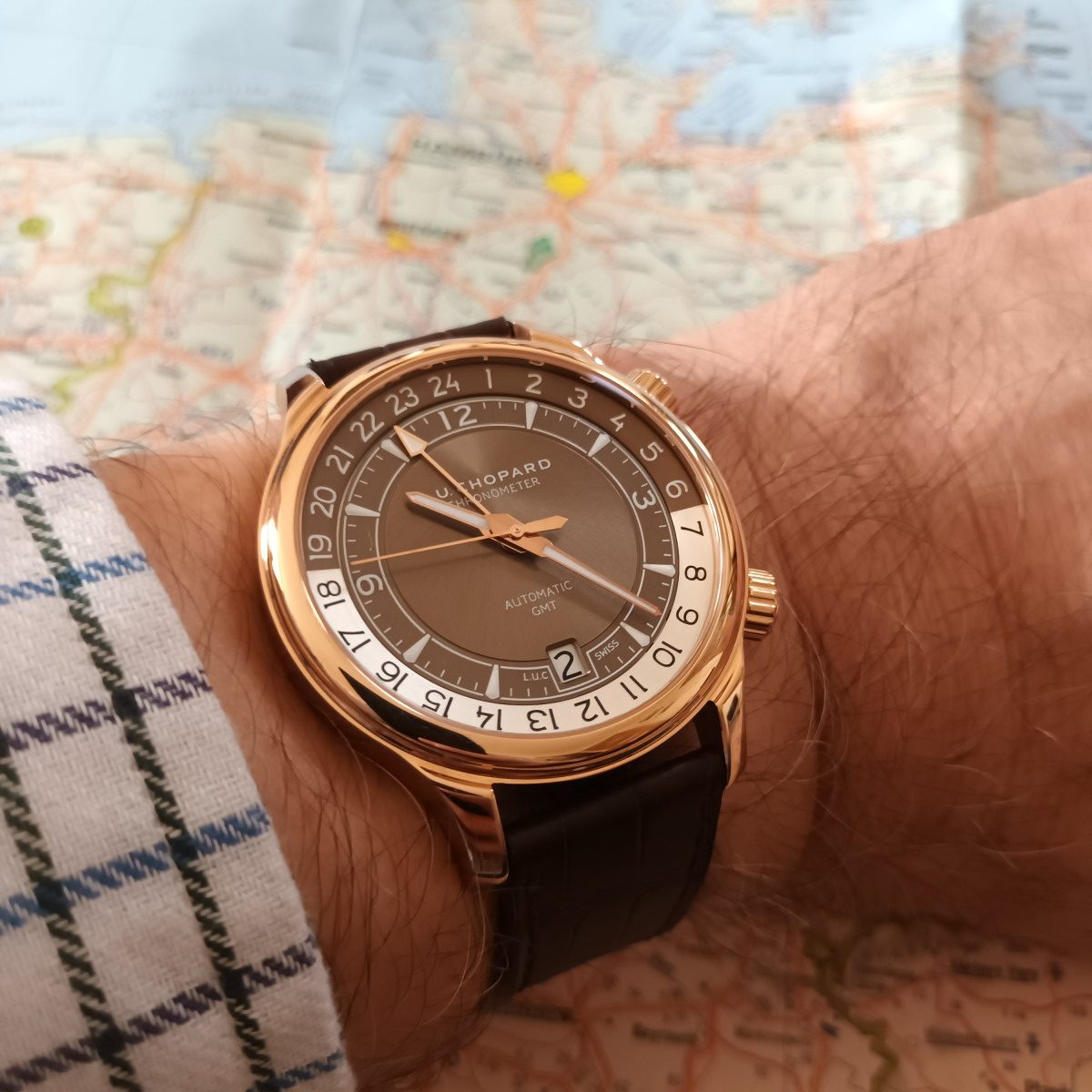 In conclusion, I have now got a cracking GMT watch in gold, with superlative aesthetics and mechanics – all from a top maison. However, let me frank and say it was the price that really swung the purchase for me. Quite simply I cannot now not lose out financially, and that is pretty rare for a premium new watch purchase. I remain a bit perplexed as to why such a large discount, as I really cannot think that the piece was such an incumbrance that it just had to be got shot of at what must have been nearly cost. Maybe the dial colour was not everyone’s cup of tea – I suppose black would be fantastic, but peering at the said piece as I write I really cannot think of much I would change. I just need to go abroad now!

Thanks go to Berrys