As mentioned elsewhere, I have a fondness for chronographs and in particular IWC offerings. One reason for this is that my first “expensive”  watch was a Der Flieger Chronograph (reference 3741) back in 2000. This is a baby at only 36mm and is also quartz – one of the last types made by IWC. Since those days have I acquired two more Pilot’s chronographs –  Fliegeruhr reference IW371704 from 2012 (42mm) and the Pilot’s Watch Chronograph Edition “150 Years” reference IW377725 (43mm) last year.

My interest was piqued again earlier this year when for SIHH IWC showed their revamped Spitfire Pilot’s range – usefully coinciding with their sponsorship of a 1943 WW2 Spitfire (dubbed the Silver Spitfire as it has no paint), which will attempt a round the world attempt in the Autumn. In this regard I was blessed to have had the opportunity of attending the 77th Goodwood Members classic racing car event in April as a guest of IWC – who are the official timekeepers, and arranged via watches of Switzerland with whom they have collaborated with on a double chronograph. So, I was therefore able to view a good range of up-to-date watches – including the Spitfire range at the IWC pop-up shop there, and feast on classic racing machinery. On the latter, I would just note that there was simply a mind-boggling range present and the drivers took no prisoners despite some vehicles being worth literally seven figures! David Coulthard was racing the IWC 1955 Mercedes 300SL Gullwing and won his class – not entirely unexpectedly I suppose! All in all it was a great experience, and I would be keen to reprise (hint hint!).

Getting back to watches, the Spitfire range comprises of a variety of models – including; time only pieces, a perpetual calendar, UTC and chronographs, plus a reworked Timezoner piece that in fact has been issued to the two pilots – Steve Boultbee Brooks (who was racing a D Type Jaguar) and Matt Jones. Interesting as that watch is, my particular focus is on the chronograph of which there are two variants – one in stainless steel and the other in bronze. Further enquiry honing has led to mainly the former – one reason being that it is similar to one of my own existing models (the IW371704), plus, it is available now whereas the bronze version is not out until October.

So, what do we have? Well, something that looks pretty similar to my old watch really. The basic case design (now 41mm) and screw-in crown/pushers appear more or less the same. The dial is black, and the sub dials present the same information, however two have changed places so now we have the minute dial at 12, the hacking seconds at 6 and the hours at 9. The day/date aperture remains at 3. The numbers and indexes look similar being certainly legible, but whereas before there was a minute track outboard, this now shows seconds too. The other main dial difference is that the lume on the 4 main indexes and propeller (or spear) shaped hands is a “vintage” cream colour. Protecting the dial is a convex sapphire glass with anti-reflective coatings on both sides.

Turning to the propulsion system, alas not a Rolls Royce Merlin putting out some 1,720 H.P, but the newish calibre 69380 – part of the 69000 family which first appeared in 2016 within the Ingenieur. My old watch has an ETA Valjoux 7750 based unit and this has been IWC’s staple chronograph movement (79320) for many years.  Satisfactory, however a bit of a workhorse and somewhat common and dated now. So, I suppose an integrated column wheel in-house calibre was somewhat overdue for a manufacture the size of IWC. Calibre 69380 beats at 28,800 (4hz) with a power reserve of 46 hours, all smoothed along via 33 jewels. The rotor is now bi-directional so winding is more efficient than before. As usual on these pilots watches the case back is solid in order to provide complete anti-magnetic protection. The caseback is dominated by an engraved “from above” image of a Spitfire. Water resistance is to 6 bar, i.e. 60 meters.

Lastly, there are two strap options for the steel version – a green Tex material (not a Nato type though) and a dark brown leather one – both on pin buckles. 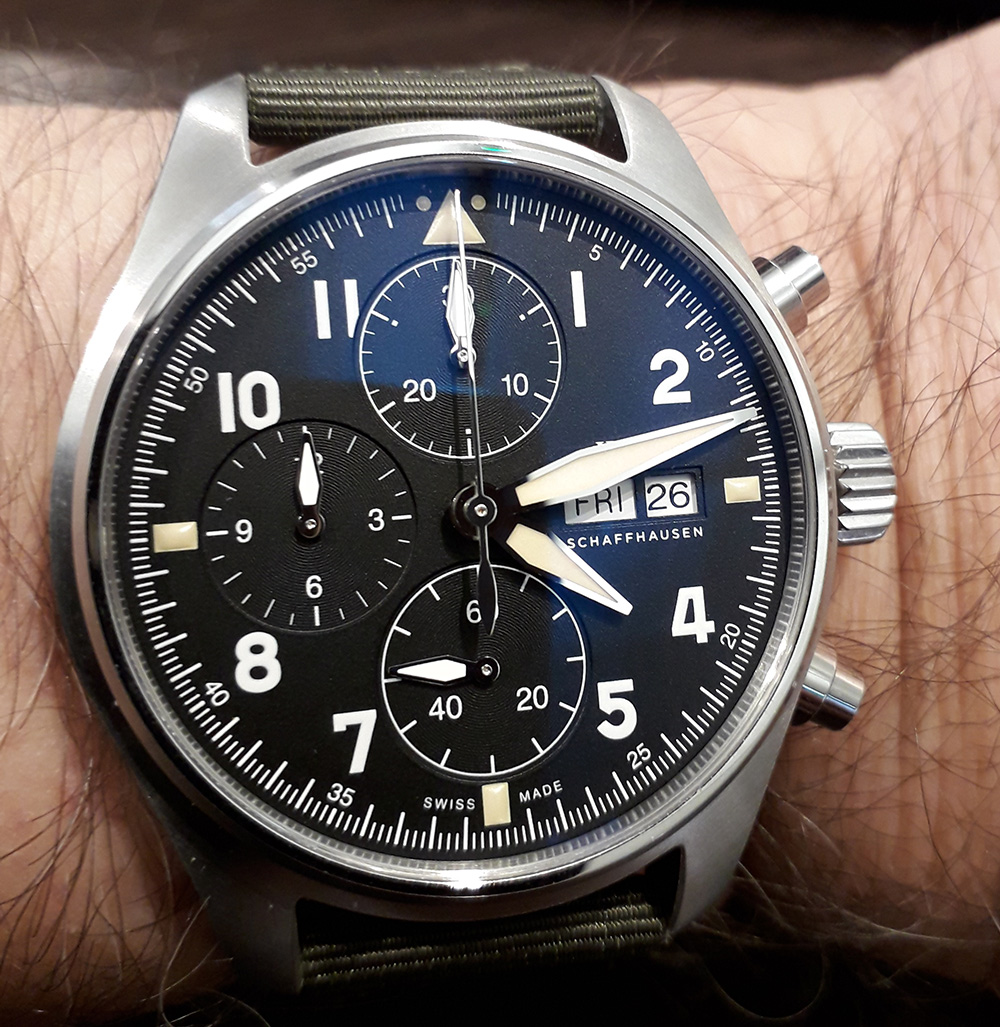 Although this review is really on the steel version as this has been physically seen/worn, some comment on the impending bronze version (reference IW387902) must be made. All the details are the same – save for naturally the case material, plus the dial and hands. The former is in an attractive and somewhat subdued bronze with a brushed finish. The dial is a deep green, reminiscent of British Army vehicles during and sometime after the 2nd WW. Green Goddess fire engines come to mind for those that can recall them! The four indexes are again in the cream lume, however the hands differ to the steel version in that they are in white lume and edged in gold. Additionally, and curiously, the caseback on this watch is in titanium rather than steel.

Verdict: Although I am slightly biased, I do feel these watches represent what an archetypal chronograph should be like. They are visually attractive yet understated, and the overall style and proportions are about right. The mechanical functionality is very good and information presented with simple clarity. I also personally like and indeed need a date complication these days! Finally, the strap options finish the package well although, as often with IWC, the leather option could perhaps be a little thinner and more supple.

On pricing, the steel model is £5,190 – so only £400 more than the Classic version. With the various improvements I feel this is good value. The bronze piece is some £500 more at £5,690, but for what you get extra in terms of case materials and appearance, again, I feel is fair.

Which one to have? Well, I suppose this is a bit subjective, but the bronze and green dial version is certainly super cool and unusual so would probably be my choice.

Lastly, I feel incumbent to mention the IWC Watches of Switzerland Pilot’s Limited Edition. This is a 44mm stainless steel double (or split) chronograph, based on the TOP GUN Ceratanium.

The dial is black with two of the three sub dials in silver. These two dials also have red hands – as is the second hand, being W of S cues. The lume on the hands and indexes is white, but an effective and intense green under light. The movement is the 79420 calibre with a 44 hour power reserve. The usual day/date combo at 3 is also present.  The case back, as usual, is solid, and mentions W of S plus the numbered piece out of 50. Finally, a black leather calfskin with white stitching, on a pin buckle, nicely rounds things off.  The watch is now available (if not all snapped up) at a price of £9,990.

Verdict:  For me, the case size and weight is perhaps a little too much for my wrist, but if I was in the market for a good split second and attractive looking chronograph I would certainly give this offering serious consideration. It is an attractive looking and functional watch from a a quality brand, plus, in a rare presentation.