Well, we are still mired in this seemingly interminable virtual imprisonment. Our usual social activities of; meeting friends, attending various events, eating out and holidays are curtailed. Hit hard are single people, and I make no apology for admitting that I am finding it very difficult. With such confinement, having someone to debate, moan, and laugh with means a lot, so, at some point I may have to remedy this deficit!  Being financially secure and living in a decent house with garden are all of course a bonus, and I do appreciate that others are having a much worse time. However, it is all relative.  At my age of just 60 (you shriek in disbelief, but alas it is true!) and with the vaccine programme going well, I am hopeful to get my jab maybe in March. Fingers crossed we can emerge from this nightmare from March/April onwards. To all those reading this, keep going and I wish you well.

As mentioned in previous articles, in the current circumstances the ability to obtain watches in the flesh to review is all but impossible. I have noticed that the more illustrious review sites are – with few exceptions, relying on just publicity images. I have always tried to avoid this as I strongly feel that you cannot offer a truly meaningful and honest review without personally handling, wearing, and viewing a watch. Size and weight wear so differently depending on style, and being able to see a watch in a changing light can utterly change a dial’s image. Although I have some irons in the fire to obtain a few watches to review in February, I wanted to write some more now. As such I am having to raid my inventory.

A few years ago (July 2018 in fact) I decided to try for another Patek. I wanted something slim with a few complications – including a date and not outrageously expensive. To this end I had been scoping the 6006G – 012 model with the blue dial for a year or so and this of course was based on the 6000 reference launched in 2005. However, as this dial option was no longer in production, it would have to be a used model – but I could not find one that suited. As such I decided to look closer at the black dial option of ref 6006G 001 which was launched in 2017 as an anniversary model to celebrate 40 years of the 240 calibre. As it so happened, my local AD had one in store so I went to have a look. It was lovely, and in many respects was all I wanted. That said, the model did have some mixed reviews on the aesthetic front, as it was a bit of a departure from Patek’s usual dial clarity and symmetry. I decided to tread water but in fact returned twice more. In the end I decided to buy, but this was partly down to the fact that the AD agreed to part exchanging an existing watch. Yes, I did had some slight reservations but reasoned that if I had blundered then I would not have expended 100% new cash! 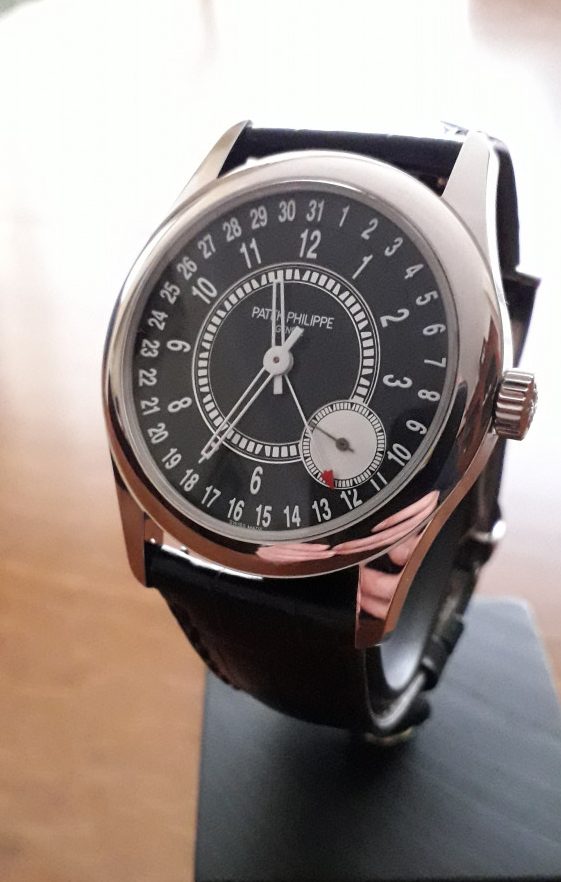 The 39 mm case is in white gold – round and nicely proportioned and with a height of a mere 8.84 mm is super slim. It is highly polished including the plain bezel. The lugs are quite simple and flow well from the case. The crown is of a sensible size and has the Calatrava Cross emblem. 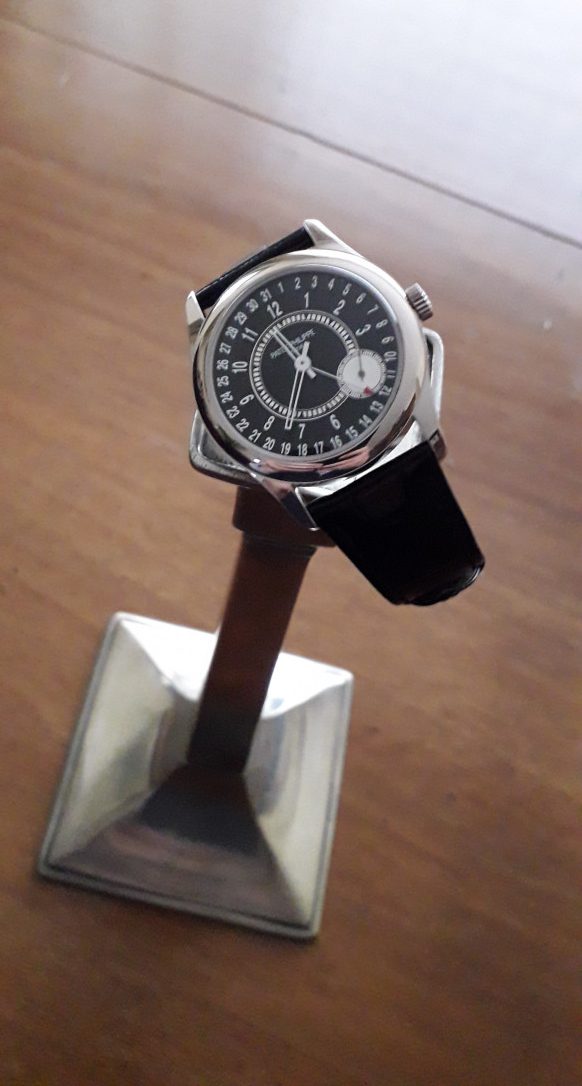 As usual it is the dial and it’s features that take center stage. In this case a black with two main patterns. The inner and outer portions have a very fine grain effect whereas the middle portion has almost imperceptible circular brushing. The inner element is bordered by a white minute  track with the middle band containing the Arabic hour numerals.  An offset seconds dial resides at 4 o’clock and contains silver guilloche circular snailing. The main hands are in white and of a skeletonised baton shape. There is a white hand tipped with a red arrow that points out the numbered dates at the dial band periphery. All the numerals and minute tracks are nicely raised in an almost 3d effect. All is topped off with a sapphire crystal cover. Incidentally, there is no lume application here.

Turning the watch over, a large exhibition window reveals the calibre’s organs. The main feature is the micro rotor of 22 ct gold, which has the Calatrava Cross motif and Cotes de Geneve stripes. The various bridges also have the latter design cue. Under this, perlage decoration can be observed. Overall, an attractive sight.

This “silver” finished watch is well complimented by a black alligator deployant type strap with the Patek Calatrava Cross “button” in white gold and black. 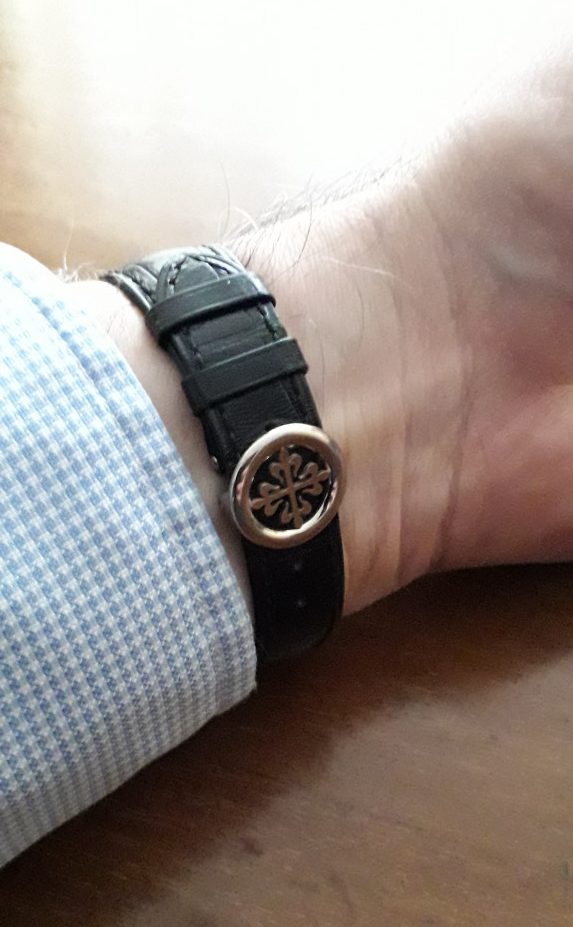 The watch clearly remained popular as it has only, I think, very recently departed from Patek’s current range. The rrp was around £25,300. 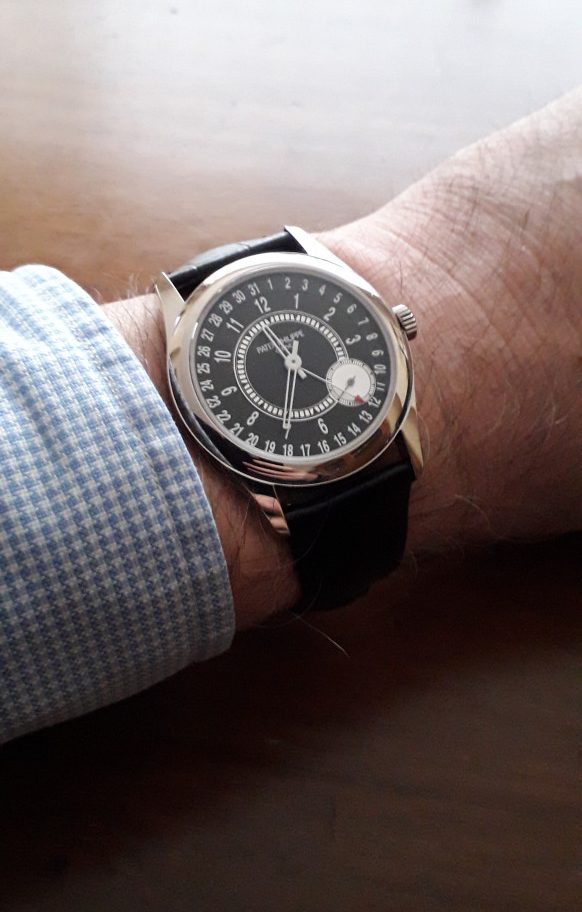 In conclusion, my impressions. Of course quality workmanship and timekeeping goes without saying. The watch is also well proportioned, light, and very comfortable to wear. Upon close scrutiny there are many very subtle aspects to do with the dial and hand finishing. So, why do I not wear much? Well, for me, in the end, it did not quite push all the right buttons. Firstly, I now appreciate that I am not really a white gold (or platinum) soul. Lets be frank, it could be in stainless steel and few would know otherwise! For me a gold watch needs to look gold, and that is in rose or yellow. Secondly, and personally, I do prefer great dial display symmetry. However, if I had the watch in, say, yellow gold with a black or blue dial – along with maybe solid and gold hands, it would change the whole visual experience and I think I would view it as a keeper.

My reservations are of course entirely personal and aesthetically based. I know others really like this watch and, at the end of the day, it remains a corker from the premier brand.

Images and words by: The Writer.