Where is The Writer I hear you ask? Has he expired, or maybe hired to do greater things elsewhere? Well, no to both. The truth is more mundane, albeit challenging, being to do with abode change matters.

About two months ago I decided to put the homestead on the market, having all but retired from my main profession and feeling that I needed to fulfill a longing to move back to where I first alighted when I came “Up North”, over 30 years ago. In general terms this is somewhere in North Yorkshire and so is over 100 miles away.  So, an agent is appointed, visits, and is duly enthusiastic on both price and potential sale speed. House goes on the market and I get two offers (at the asking price) the next day, so, before any viewings! A week later there is a block viewing with some 7 souls, with then 4 of them then battling it out. A day or two later it is all over with the victor offering some 8% above the asking price!

So, what’s not to like? Well, although I knew the market was keen, it did catch me rather on the hop. The little over two months I had to the projected completion (at the end of June to meet the stamp duty holiday) seemed ages away and more than ample to do what I needed to do. Up to a point the Stamp Duty did not affect me as I had always intended to rent – initially at least, but in another way it did of course as the folks in the chain were as keen as mustard to save substantially. Two things however that I had underestimated; the quantity of stuff I had to sift, sort, donate or ditch, and, the dearth of decent rentals in my chosen spot. As I am doing all this myself whilst juggling other responsibilities (e.g. an aged mother with dementia in a home amongst other things) the former is hugely exhausting – mentally and physically. The latter is just depressing and stressful with hordes of folks applying for all rentals as soon as they appear. I thought I was sorted out with somewhere, but this unexpectedly fell through a few days ago, thereby potentially leaving me and some of my possessions homeless. I say some, as I did mercifully take the precaution of renting some storage near my favoured location into which I have been shifting stuff into over the past weeks. Thank God I did! Anyway, my estate agent had possibly come to my rescue and offered me a rental for 3 months. It is not ideal being more or less where I currently live, but frankly there is no other option as I do not want to lose my sale – and seriously piss off 5 other parties!! Anyway, you will gather from all this that my time has been somewhat diverted from watches – but that of course does not mean complete dormancy had occurred, so hence this “interim” piece!

Last week I was in York (checking out some agents/properties) when I came across a small antiques center. You know, the type that has lots of display cabinets owned by different dealers who in the main are not present so a manager acts on their behalf. Needing some light relief I entered and discovered some watch displays. There was little really to excite a collector, with most pieces being really, really low end tat. However, a couple of interesting items caught my eye so decided to have a closer look. One was a Seiko Hi-Beat Chronometer and the other a Favre Leuba Duodate – both from the early 70s. I decided to buy both but as my offer was out of the manager’s 5% discretion range (as I am very mean), the dealer had to be contacted. I ended up taking the ‘phone as the lad just could not pronounce FL and this proved to be interesting. It turned out that the owner was in fact the UK manager for Ball & Co who had a collection and was reducing. Anyway, we had a brief chat and did a deal at £550 for both – also exchanging details as I mentioned that I had never reviewed a Ball, or for that matter ever had actually handled one!

I shall now provide a little more detail on the watches. I say little and mean it! Firstly, I have not found too much information online about these watches – particularly the FL and at the moment do not have the time to do more. I will though do so and intend to contact both manufactures in due course.

Starting with the Seiko – which may be from about 1972, and is known as a 5626 7090T model. I think this is essentially a non-named King Seiko and is of similar quality.

It has the top notch Seiko Hi-Beat 5626 calibre (28,800 vph) from their higher end watches and is noted as a chronometer. This is interesting as if I recall, the Swiss banned Seiko from using the chronometer title on the watches so this clearly predates that. 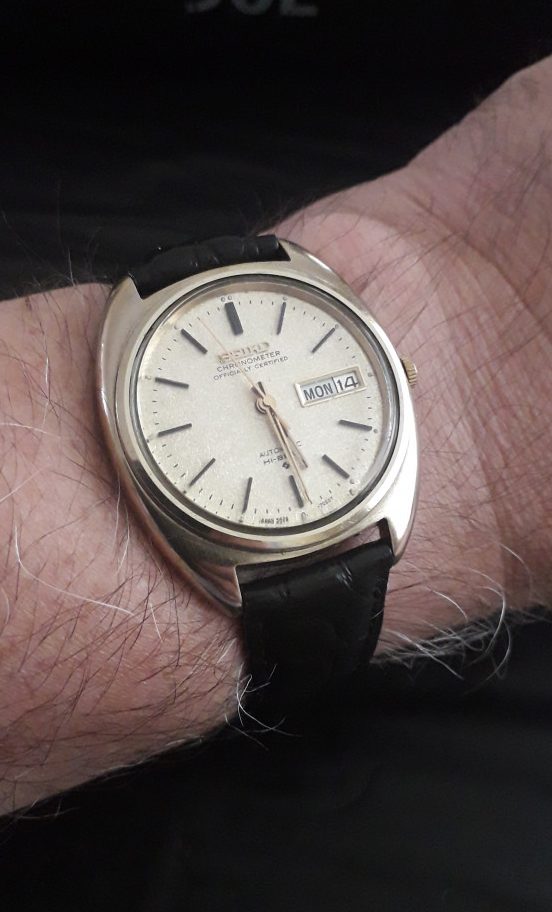 The case is some 36 x 8 mm or so and typical of the “cushion” type in the 70’s. It is gold plated but apparently with 14 ct so is one of the best. Interestingly, there is no access through the case back. Any work will require removing the crystal/bezel/dial. As this is a little irksome, Seiko thoughtfully provide an adjustment access port via a screw positioned between the lower case lugs as shown below. 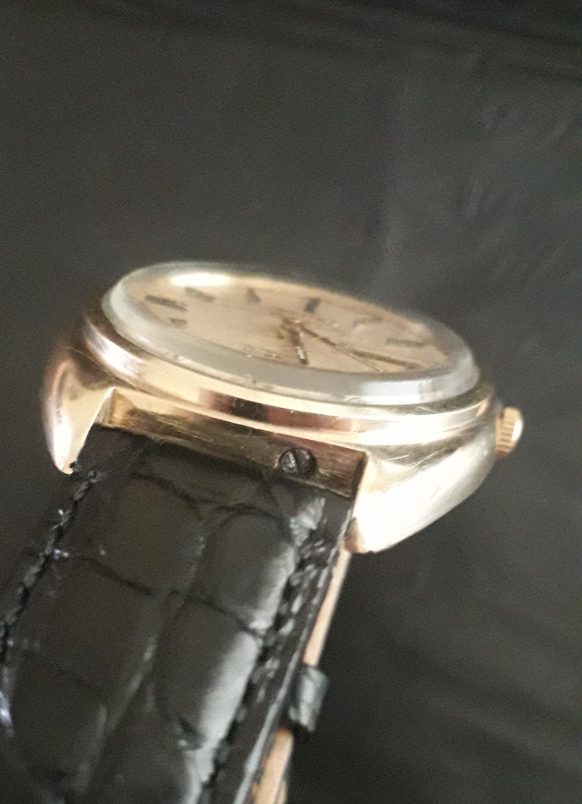 The dial is golden and made with tiny wires and is known as either “Florentine” or “Golden Starlight”. Under a loupe it looks a bit like later Seiko bark effect dials, but this has horizontal and vertical striations. It is quite lovely. At 3 is the day/date window (black on white) bordered in gold. The hour markers are simple batons in black, with some lume dots outboard. Black minute lines are interspersed. The hands are baton type, with black from the center then with some lume later. The second hand is a fine needle in gold. Under 12 is stated; Seiko Chronometer Officially Certified. At 6 is stated Automatic Hi-Beat. 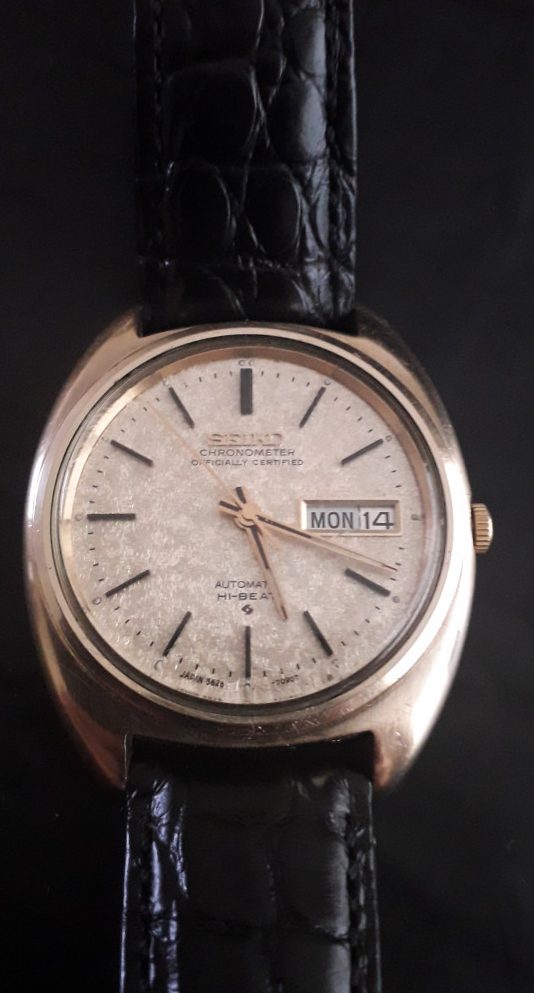 Finally, the solid case back has useful information, including “Open through glass”!  Recessed in the centre is a nice gold medallion reiterating “Seiko Chronometer”. 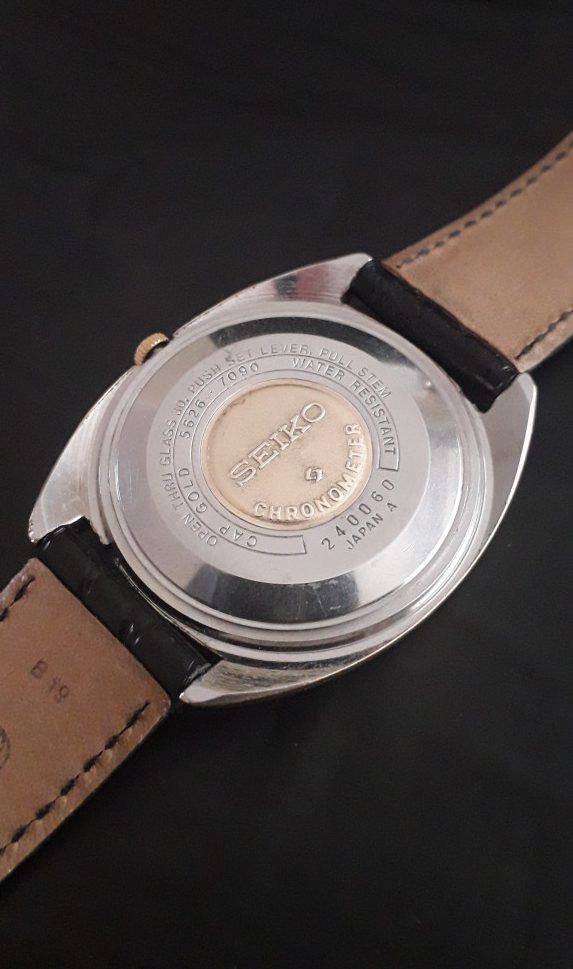 As to the piece itself, there was no box or papers or Seiko strap or buckle. Later that day I bought an Alligator/gold effect strap from Berry’s in York which works fine I think. The watch has apparently been serviced (?) and certainly seems to run OK. The case has a fair few scratches and I do not think the crown is original. I like the watch so may see how much Seiko would charge to do some work on it.  In pristine condition, it would make a super dress watch which I feel was the original intent. Did I get a deal? Well, I suppose I paid some £350 for the watch and I have found a couple online for some £800 so maybe I did. I think it possibly has some rarity too. Watch this space!

Turning to the Favre Leuba, well this missive is really going to be minimalist as I have so little to go on! The case is stainless steel and a really boxy 35 x 12 mm or so, and like the Seiko has a solid screw back. Unlike the Seiko however there is nothing on this at all! 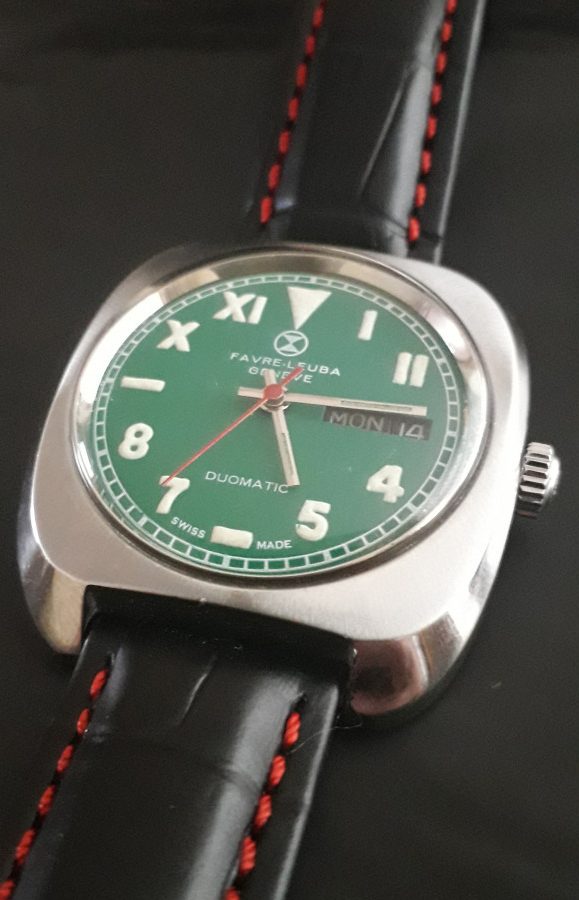 The front has a domed crystal (or Plexiglass) covering a quite unusual green coloured dial – somewhat like the racing car hues from the 50s/60s. Outboard is a rail track in lume. Inboard are an odd mixture of Arabic and Roman numerals in heavy lume. At 12 is an inverted triangle and at 6 is a lying rectangle. At 3 there is a day/date window – white on black. The main hands look to be batons in s/s with some lume. The second hand is in red. The dial notes the maker, origin and model name. 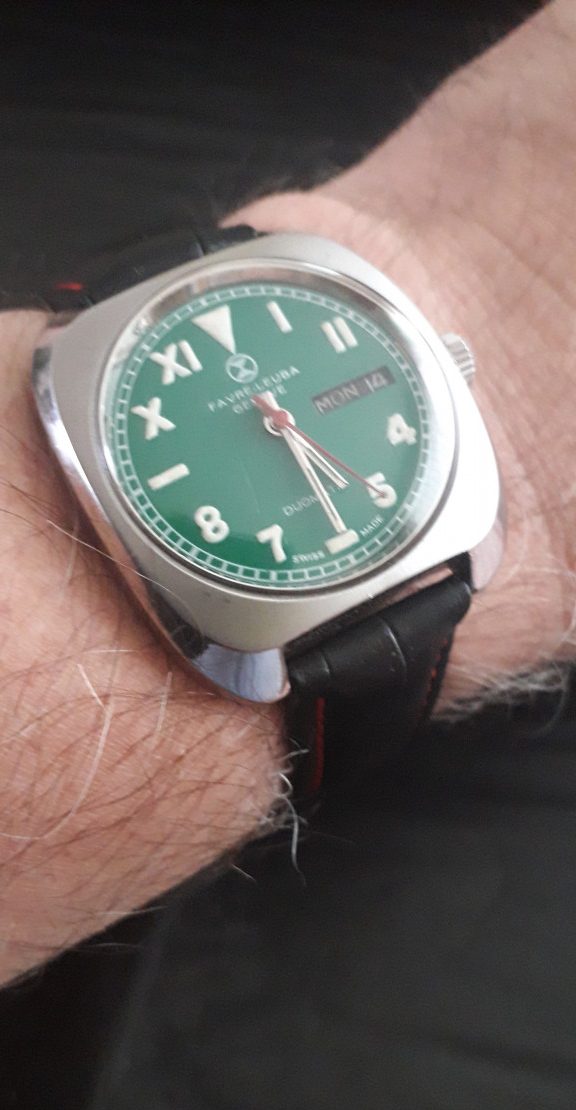 As to the inner workings I am none the wiser after looking inside. It is a bit grubby and is not in overall good condition but it is keeping good time. The only indications I could find anywhere was on a lower plate – AS 1916. 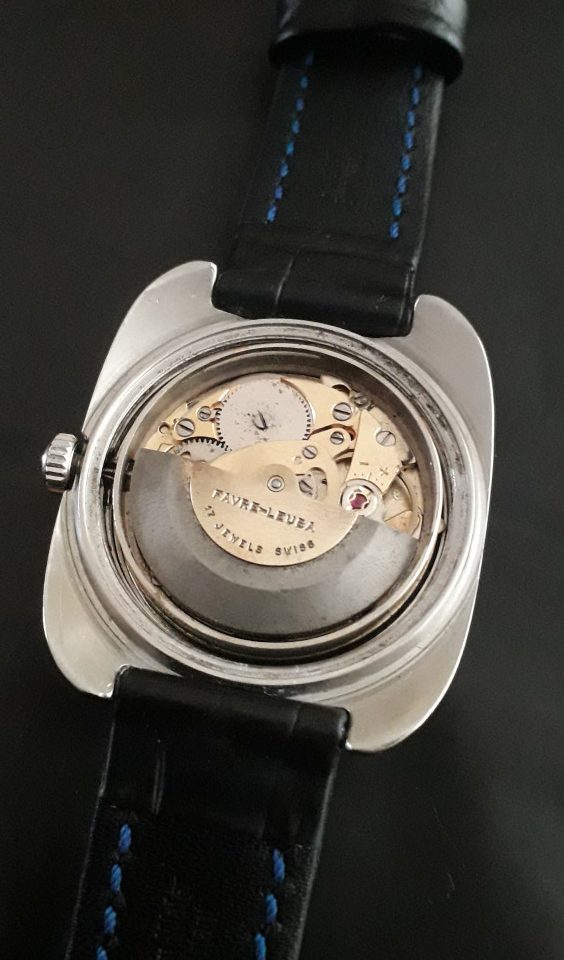 Well, the watch is a bit of an oddity in looks but that is it’s charm – pure 70’s! It is also from a once very successful and in fact very old manufacture – before they went bust in the 80’s due to the quartz onslaught. Pricing? Well, again no papers, strap or buckle and I paid some £200 for it. The few I have seen go for that and up to £250.  I did spend a little at Berry’s again on a more suitable strap – the outer red stitching linking to the red second hand perhaps? Again, I shall attempt to get more information from the resurrected company at some point.

Lastly, I have recently bought a new Tissot PRX (quartz version) so will write about that when I can. In the meantime wish me well!!