As readers may have observed, things have been very quiet here of late. So, a little explanation and updating may be apposite.

To be frank, my main job got really busy in August with ensuing partner retirement. The upshot being that we decided to wind-down (sorry) the business.  I will continue – for the time being, to work at another firm a friend runs, but the task of client discussions and transfers is onerous and quite exhausting! Add to this the fact that I am thinking of moving home – partly to take advantage of current market buoyancy, but also to seek a more quieter and rural haven. Frankly I am fed up with the inconsideration that the suburbs breed and crave more peace and quiet.  What’s the big deal I hear you ask? Well, three months ago I could simply not have physically moved due to my own – and my Mother’s detritus.  Thirty bin bags to charity, five bags to a curio shop, eight visits to the dump and my own domestic bins getting a hammering, may give you an idea of the scale of the problem! All not made any easier by the fact that Mother is in a care home and sorting through her possessions is a little emotional on occasions. Oh, I nearly forgot, my neighbour got a large skip to clear his garden and as he only used two thirds allowed me to fill the rest. This I did with ever increasing ingenuity and skill in order to maximise my donation! I have survived the physical effort – just, and reckon I am three quarters there!

Added to the above, the dearth of getting one’s hands on watches by travelling about, meeting people and going to boutiques also played a factor in a reporting aridness. That said, I did managed to get some pieces sent to me, so, much thanks to Monica Poracin at The Blue Company for the Meistersinger and Muhl pieces,  and Lotte Lugg at Bremont for the Alt1 P2 Black.

As part of the reduction exercise, I have also sold my two Rolexes (1963 Precision and 2016 GMT 2) – with some profit! Also, the Bell & Ross Heritage Chronograph. All nice in their own way, but I was just not wearing any more. The idea of course was not to buy any more timepieces at the moment, however, you know how it goes. To be fair the subject of this article was a “cheap” bargain buy really, so I cannot be too chastised!

In the small town where I work there is a small jeweller who makes small items – ha ha! They have been there for some time and mainly specialise in making really nice bespoke jewellery – rings, necklaces and so on. In addition they usually have about half a dozen watches in the window – mostly lower end items to be fair. Recently, as I was walking past, I paused as usual to look at the watches and my eye was caught by a silver pocket item. Of particular interest was the Freemason’s insignia of the compass and setsquare on the dial. I went in and had a look at the watch. It was pretty much standard fare – in this case a Waltham from around 1890’s and cased by Dennisons. This was an informal tie-up as Aaron Dennison was an American who came to England and started a watch case making business in Birmingham in the 1870s mainly to house Waltham movements. I was interested and as the piece had apparently been serviced, checked and was announced as running well – plus the price had been reduced from some £250 to £185, I decided to invest! 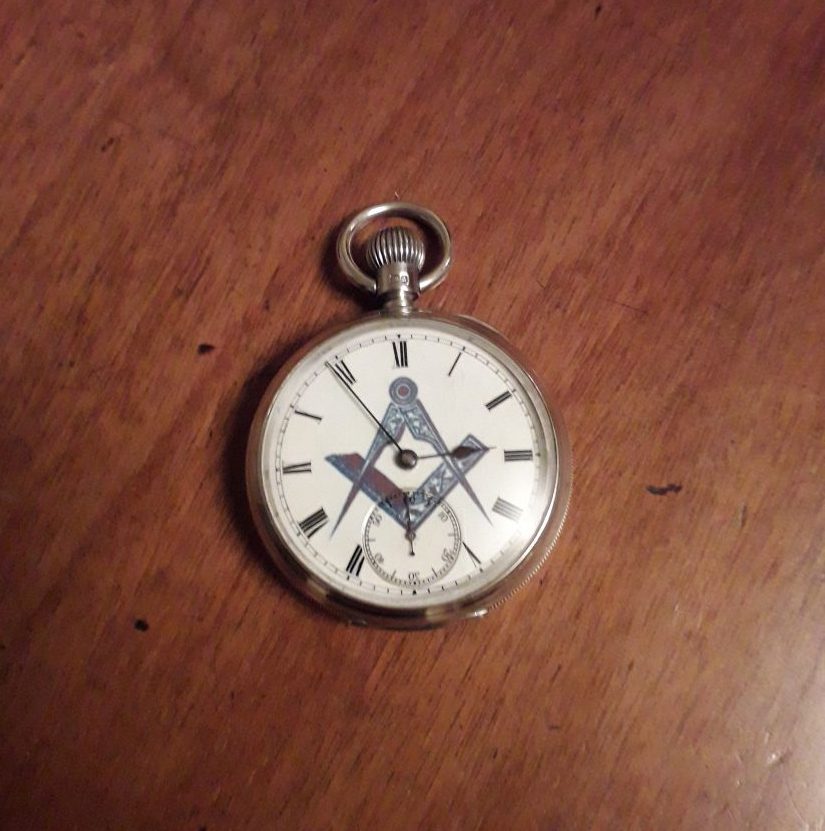 The dial appears (?) to be porcelain with the Masonic insignia  in an attractive “Dutch” china blue. The latter appears to possibly be some kind of transfer applied before a firing, as I cannot feel anything raised. The running seconds dial is slightly recessed. Roman numerals are present with an outboard railway track denoting minutes. Lastly the hands are blued steel with the hour one spade shaped. So, the enigma! Was the watch made with this dial when cased up by Dennisons, or did it have a Waltham dial originally but then converted for a Mason later on? Well, I would like to think the former but of course we will never know. 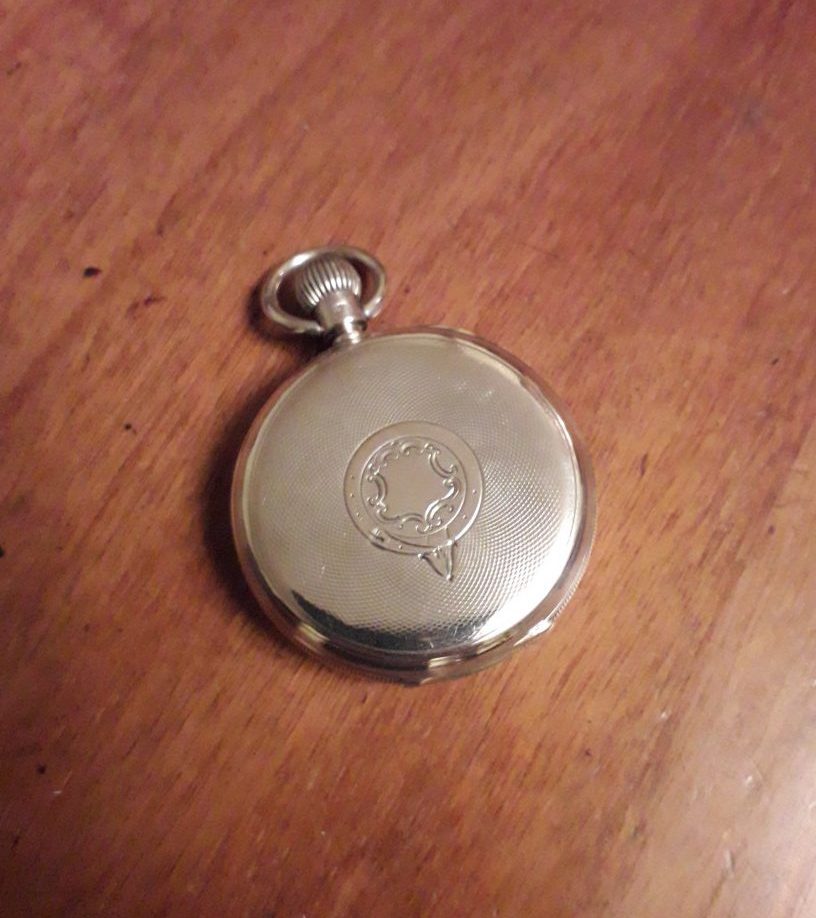 On the case back is engraved an armorial type shape with an inner shield which is blank. All around is decent engine-turned engraving. 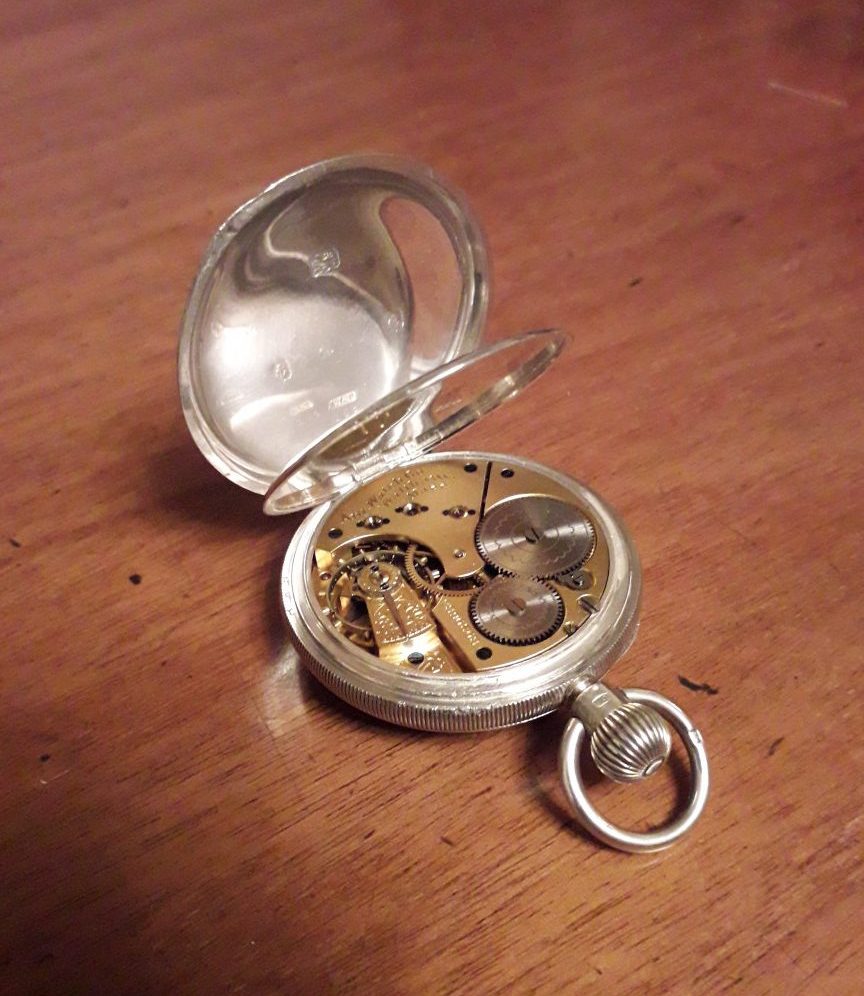 The case is some 50 mm and the back is fully hallmarked indicating Birmingham, a date of 1904 and the ALD initials – the inner cuvee likewise. There is a little “chewing” where the case opening lip has been wrestled open – common sometimes with pocket watches as the covers can be pretty snug. I can probably do a little work on this to resolve. The bow is hallmarked too. The front glass opens allowing dial access. 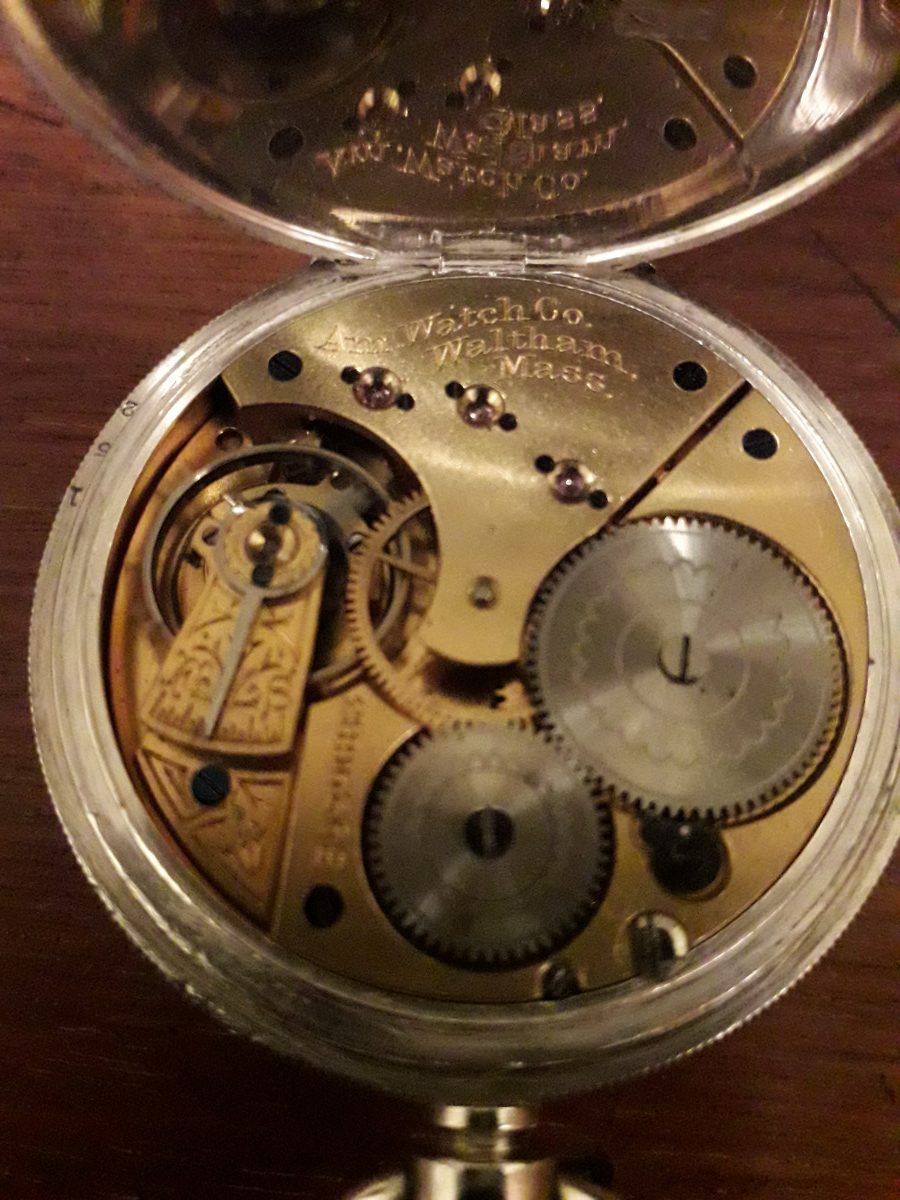 The movement is clean and looks to be unmolested. There is some modest patterning on the barrel and crown wheel, but more intricate engraving on the regulator. The inscription reads AM Watch Co, Waltham, Mass. A serial number is also noted. The movement was of course mass produced really, but was of decent quality. The watch keeps very good time. 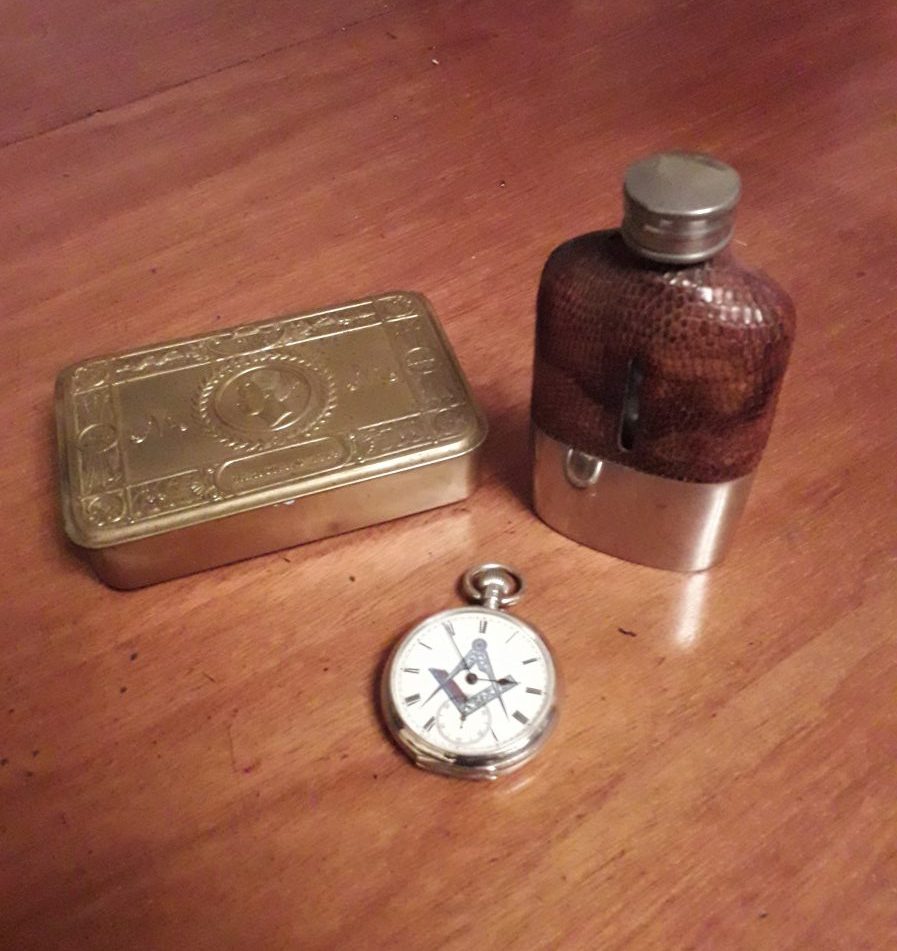 Overall, the piece is attractive and honest and the Freemason insignia interesting. According to the jeweller, the source was from the Newcastle area so it may originate from a lodge member there. I have positioned the watch next to some of my Grandfather’s WW1 memorabilia – the Christmas Box give by Queen Mary to all soldiers and his trench hip flask. As Grandfather was also a Mason he could have quite easily have taken such a watch to war!