A fair number of years ago when the number of my automatic watches reached two, I decided to get a watch winder. Well, it was not quite like that as I had bought a new watch from a national retailer and they threw one in. It was an innocuous cube in glossy black – a badged well-known make in fact. It was of overall decent quality, with mains or battery options and a control at the back so you could increase/decrease the rotations. There was no directional control so it simply revolved both ways. The only irritant really was that the cuff/cushion arrangement couldn’t really cope with larger watches, whereby they would suddenly ping off! This was because the recess behind the cuff at the back was not sufficiently accommodating for a larger strap/buckle, so, it put a strain on the plastic locking mechanism (which frankly was not that robust) and any pressure at all and, well, ping! At the time it was an interesting but useful novelty. I do still use the winder, but only really for average to slim watches.

Moving on a few more years and the automatic pieces had grown to ten or so. I did some research and quite liked the look of Wolf’s offerings. Again, I was in my local retailer – the same one as before actually,  and they had a selection of their winders. I had just recently bought another watch from the retailer (more expensive this time) and they had mentioned that they might be able to “do something” for me. In the end I bought a six berth Viceroy, quite expensive but a bit knocked off did help the decision! This unit is quite attractive and sophisticated, with a lockable front glass opening panel and full individual controls for each winder. I must admit that when it is fully loaded and moving it is impressive! However – and for fear of stating the obvious, the point is that I can keep multiple watches going all the time and ready for use, plus, the pain of adjusting a date, moon phase or perpetual calendar is obviated. All that said, some pockets may not reach to such machines – the Viceroy I note is some £2,300 now, so more modest alternatives may be required.

All the above seems pretty straightforward and self-evident does it not? For most of us yes, but there are people I know with a few watches that have no clue that such winders exist – in the same way that until watching a nature programme recently I had no clue about the Patagonian Toothfish! I therefore patiently explain all the benefits – including the need for a mechanical watch to have at least an occasional exercise in order to keep the oils from solidifying eventually causing inaccuracy, and at worse, causing total stoppage. I point out that the cost to rectify can be eyewatering, in addition being without your watch for what can be several months! So, I nudge them in the right direction, after explaining that the range can be large – from the cheap and cheerful at £50 or so, to an armoured display safe for £30,000!

Of the quality brands, most watch folks will have heard of Wolf and Rapport and these do cater for most upper budgets (from say £230) and tastes. More innovative design aspects can come from Kubik or Scatola del Tempo, but generally at higher cost still. A wide variety of types, materials, and colours are possible. Singles to thirty berths, from resin covered mdf to leather, and then nice wood veneers. You want tango orange, lime green, telephone box red, or citrus yellow, no problem. Chinese, through to Japanese and Swiss mechanicals – fine. Like most things you get what you pay for – and sometimes you really do pay. Don’t get me wrong, some of the more expensive brands are attractive, well made, and have built up a reputation over many years, but how much of the cost is also just in a name? As always, there is a happy medium if you do a bit of research. Decent looks and quality at a moderate price are all possible.

In the current and restricted movement Covid dystopia, I was scratching my head for something maybe watch-related to write about. I hit on watch winders so did a little internet surfing and, amongst others, Barrington popped up. I had heard of them before but had no real notion of who they were or what their products were like. So, I did what I normally do and just called the contact number – a bit late in the day to be fair, but it was answered quickly. I explained briefly why I was calling what I was after. It turned out that the listener was Sean O’Farrell, an affable Irishman who founded Barrington in the UK some ten years ago and before that as an investor/director at Jura Watches. We chatted for the thick end of 45 minutes and it was clear Sean has plans to improve the proposition further in various ways. Anyway, the upshot was that he would be happy to send me a winder for review – after of course having a quick flick through my website (whilst we were talking) to verify at least some basic horological credentials! Good as his word, barely a day later a couriered box arrived.

So what do we have? Firstly, the packaging. This was first rate, with a sturdy outer box purpose-sized to fit the inner box which was contained within a polystyrene cradle. Inside, the unit was in a drawstring bag then foam wrapping. Phew – little chance of damaged goods here! Secondly, the winder. Well, this model seemingly has no name as such – just “single winder “model, and like my first one, is in glossy black, or Shadow in Barrington parlance. The shape is an almost-cube, but rectangular actually. At 11.5 (w) x 12 (h) x 16 (d) cm it is reasonably compact so will fit onto a bookshelf or in a safe. It is on four rubber legs that make it nice and stable. The shell seems to be of a composite material and is pretty tough. The black finish is well executed.

The round aperture at the front takes up most of the space, and this is where the cushion/cuff slots in. When ordering, one can choose from two different sizes in order to cater for larger/average or smaller wristed watches/straps. I also noticed that the cushion – or rather the frame it is attached to, is rectangular, so only slots in one way (well two I suppose – up or down) and this differs from some where the frame is round and can go in at any point. There is a nice solid “click” when pushed in, and after having used quite a few times now with different watches, I feel that these design features result in a secure berth. Lastly on the front of the unit, and to the upper right, is a small green LED light that flashes when the winder is actually rotating.

Moving to the rear, at the top is a battery compartment for two AA batteries. Under this is a metal plate that features two control knobs. The left one is for your chosen rotation direction – so, left, right or a both. The right hand knob offers five rotation speeds from 650 to 1950. The action of these has a reassuring feel. Outboard of the knobs on both sides are power sockets. The one on the left connects to the supplied mains charger (which also comes with foreign socket adapters), and the right one is for the provided “jump” or piggy-back lead to power a second winder.

So, what is it like in action? Well, I had it up and running in about ten minutes and quite simply. If in doubt there are some instructions within the “jump” cable pouch – something I initially missed thinking it was just a backing card! However, the website does provide guidance too, along with information on the ideal rotation direction and speed for your particular watch – just insert the details and bingo!

Moving on to the real action, I wanted to try a variety of watches – large, thin and heavy, plus some with visible power gauges. So firstly I inserted the watch that I was currently wearing (and super liking!) – a Grand Seiko Blue Snowflake, and off we went. Frankly, there is little to say, other than the motor – a Japanese Mabuchi unit (also used by Wolf. Ed) is very quiet and the rotations appeared to be what I set the machine to – although I am not sad enough to slavishly gawp at it for hours on end! I kept the watch on for a day at a moderate and multi-directional rotation and it was kept fully wound – as per the power reserve indicator at 10 o’clock.

Next up I tried my Jaeger-LeCoultre Reserve de Marche Extra Thin. This I had not worn for a couple of weeks so was completely exhausted – even I have insufficient winders! Anyway, it was nice to see the indicator at 10 o’clock powering slowly but surely on a medium rotation. I suppose it took most of a day to do this. However I did try again on maximum rotation and it did the job much faster – obviously!

I then tried a much more chunky and heavy watch – a gold Tag Heuer Monaco chronograph. Again, it wound up fine. I then tried my physically largest watch – a Panerai PAM 312 at 44 mm. This was in fact the one that kept escaping from my first winder, but in this case no such issues.

Finally, and probably the heaviest/largest watch I have overall, is the Parmigiani Tonda Metrograph on a bracelet. Again, my first winder struggled with this as the watch kept shifting. I just not could not get it tight enough on the cushion so in the end had to insert my own extra padding in the form of foam rubber. This time, no such problems.

In conclusion, this Barrington winder passed all my tests. It appears well-built, looks good, and runs efficiently and quietly. The extra features of; different cuffs, dual power source, control variations, and piggy-back lead are all sensible and welcome. It was also well and thoughtfully packaged. So, there are really no major concerns.  Yes, unit is a little larger than some cube alternatives – but that is nitpicking. Also, and not a deal-breaker, maybe a longer warranty than one year could be considered as most other brands offer at least two years.

Personally I think this Barrington winder can certainly compete with more expensive offerings, and at some £149 I feel it is extremely well-priced for what you get. If one wants something other than black, then fine as a wide range of colours are available – along with some nice wood finishes at a little more cost. Other versions are available. For example, a six berth winder at a reasonable £849, and the twelve berth watch safe winder at a keen £2,995 (prices correct as at November 2020).

So, once you have your winder – possibly a Barrington, there should be no more worries. You may even have made time to relax and indulge in some of the simple pleasures in life! 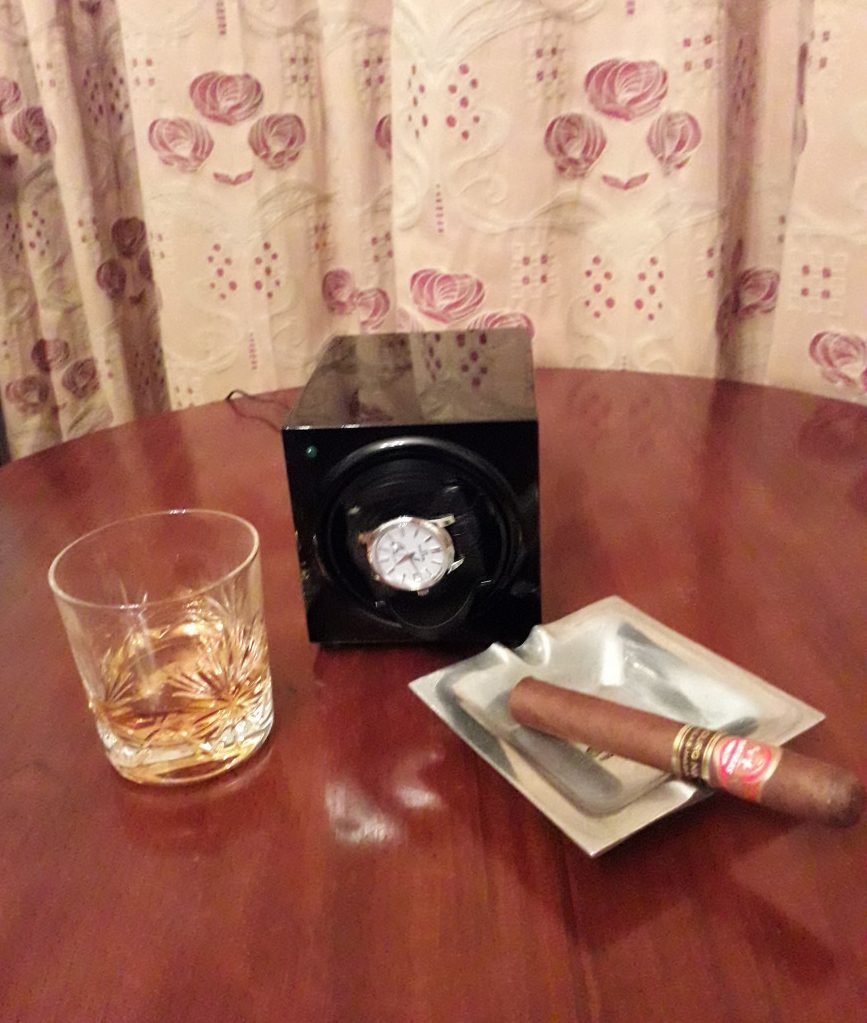 Images: The Writer – unless stated otherwise.