Whilst most of my watches are somewhat conservatively styled, I can on occasions be seduced into the unusual – both in terms of design and manufacture. At this point I make no apology for saying that usually I am unimpressed with new(ish) independent brands. At the lower end, many seem to offer designs that are just near-facsimiles of other brands – along with cheap off-the-shelf movements. To what end seems inexplicable, other than ego – ” I started a watch brand”! Those that do strive to be different can of course offer high quality and technically interesting pieces, but are sometimes ruined by impractical and weird designs. Add to all this the involvement of an “in vogue”  or “grail” maker with low output, frankly ludicrous prices can result. Success here may still be possible – particularly if the usual well-heeled suspects jump onto the “must have” bandwagon. Naturally there are some exceptions! Czapek is possibly one that has got it right – mostly, and AnOrdain is another – with their lovely dials. There are a few more, but today – and the subject of this article, is Speake-Marin.

I was alerted to Speake-Marin about ten years ago when I read an article on their stainless steel Serpent Calendar. The watch was interesting in various ways; a striking overall design – part traditional, with the dial with Roman numerals and vintage type hands, but also some modern touches, like the “industrial” straight-out lugs with their obvious screws. Also, that calendar, with a quirky serpent tail as the pointer – cool!  Add to this the movement, which was in-house and unusually (for the day) had 5 days of power. So, the overall package was compelling. I was also interested in Peter Speake’s journey to becoming a highly qualified and well-respected watchmaker/repairer, having trained in the UK and Switzerland, then eventually setting up his own brand with Daniela Marin in 2002. That all said, I was not overly convinced about a couple of design aspects so deferred further action. 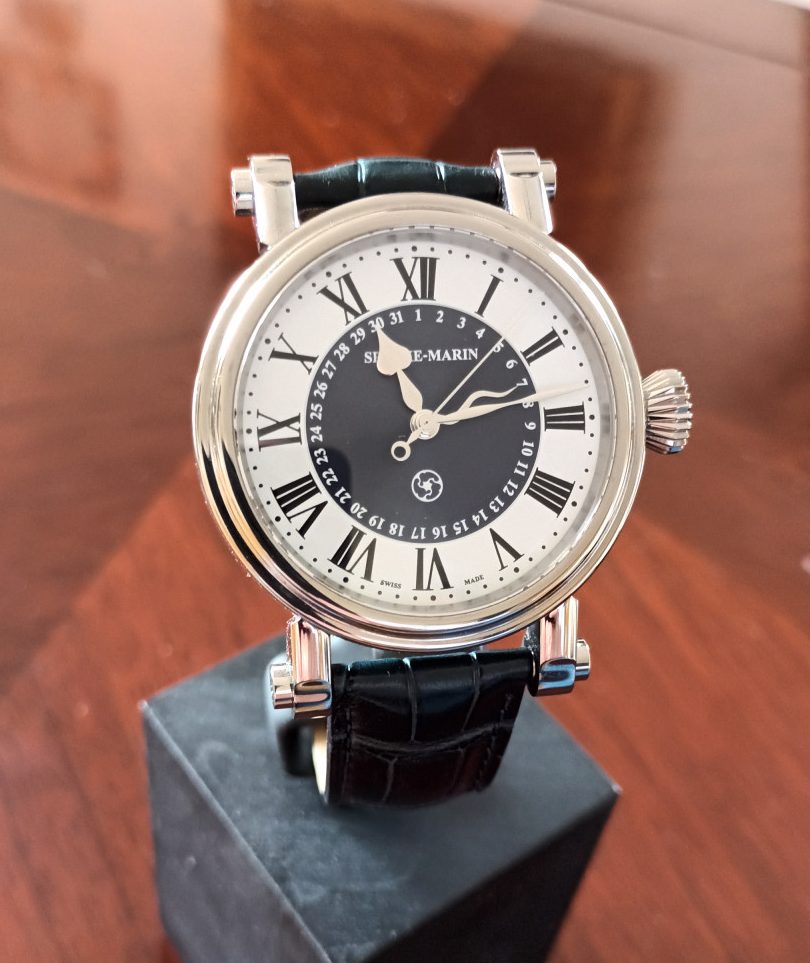 Coming more to the present (probably three years ago), I noticed that Peter and his co-founder Daniela Marin had started a new enterprise called The Naked Watchmaker. Initially, at least, this was a site that just showed Peter taking watches apart and reassembling them, whilst providing much useful comment and technical information. Occasionally I would dip into this fountain of knowledge – although being brutally honest, some of it went through and out of my pea-brain!  The site then evolved further at some point, offering an online training/tutoring resource, whereby one can sign up to various levels of watchmaking courses. If successful, one receives certification. Whilst looking at all this, and other sources, I then realised that both personalities had in fact bowed out of their watch making business in 2017. I must admit to thinking this was a little odd, as it appeared to me to be a successful enterprise with many plaudits, but there appeared to be no real explanation offered.

Now to the present! Upon having a peek at my watch-selling pal James Kibble’s site, I noticed he had for sale a S-M Serpent Calendar in blue. After some further investigation I discovered that the watch was in fact the later variant – so, now cased in titanium and with a Vaucher 3002 movement. It was, I think, released in early 2015. I studied James’s photos in more detail and quizzed him a bit more on condition etc – along with researching for more information. As the watch was in very good condition (with a full set – see later. Ed), I felt the price was reasonable – compared to say the original rrp, and others I saw for sale. So, I decided to buy.

One thing James did alert me to first off, was that although there was a S-M certificate (signed by PS), oddly it had the wrong serial number noted, plus, had no date of issue at all. Very peculiar! The watch did come with it’s nice S-M  black leather wallet and operating booklet, plus the original S-M dark blue crocodile butterfly clasp strap – although not fitted. Instead, it sported a good aftermarket Fernando Cler strap (in almost the same dark blue), but on a S-M pin buckle. Again, a little odd, but not unwelcome!

As noted earlier, being the updated model, mine has a 42x12mm case in titanium –  whilst a 38x12mm size was also available in steel. The case is overtly round and is known as the “Piccadilly”, referencing the location of one of Peter’s horological jobs in London, and was core to a few different models. Horizontal brushing is present, and atop is a two-stepped polished bezel. The S-M trademark lugs are prominent, purposefully shooting out of the case with no thought of “flowing” from it! From the side they are an almost tear-drop or comma angular shape, with a step as the curve starts. At the ends there are protruding and obvious housings for the flat head screws which secure the strap bars.  Finally for the case, there is a quite large diamond-shaped (not onion or turnip) crown, with the S-M logo – an old topping tool.

Turning to the dial, this – as with most watches, tends to be the party piece! In this case there is a white lacquered outer band – or chapter ring if you will, which has dots denoting minutes outboard, then, Roman numerals in black. The latter taper in size, reflecting the shrinking circumference as they advance in. This is subtle but nice touch. Inboard again is the navy blue dial centre which, as far as I can see, is plain. At the outboard of this are the calendar numbers in white Arabic. “Speake -Marin” is under 12 o’clock, and down nearer 6 o’clock is the brand’s logo. Turning to the hands, these are all in highly polished steel – possibly to contrast with the bezel. The minute hand is a fine double-feuille, with the hour hand initially a spear head, but finishing as an ace of spades shape. The sweep hand is a fine needle with a pierced hoop counter-weight. Then that serpent date tail – reminiscent of much older time pieces.  Moving on, there is no lume at all, so, a daylight piece really! Covering all this is a fairly flat crystal in sapphire, with a non-reflective coating. 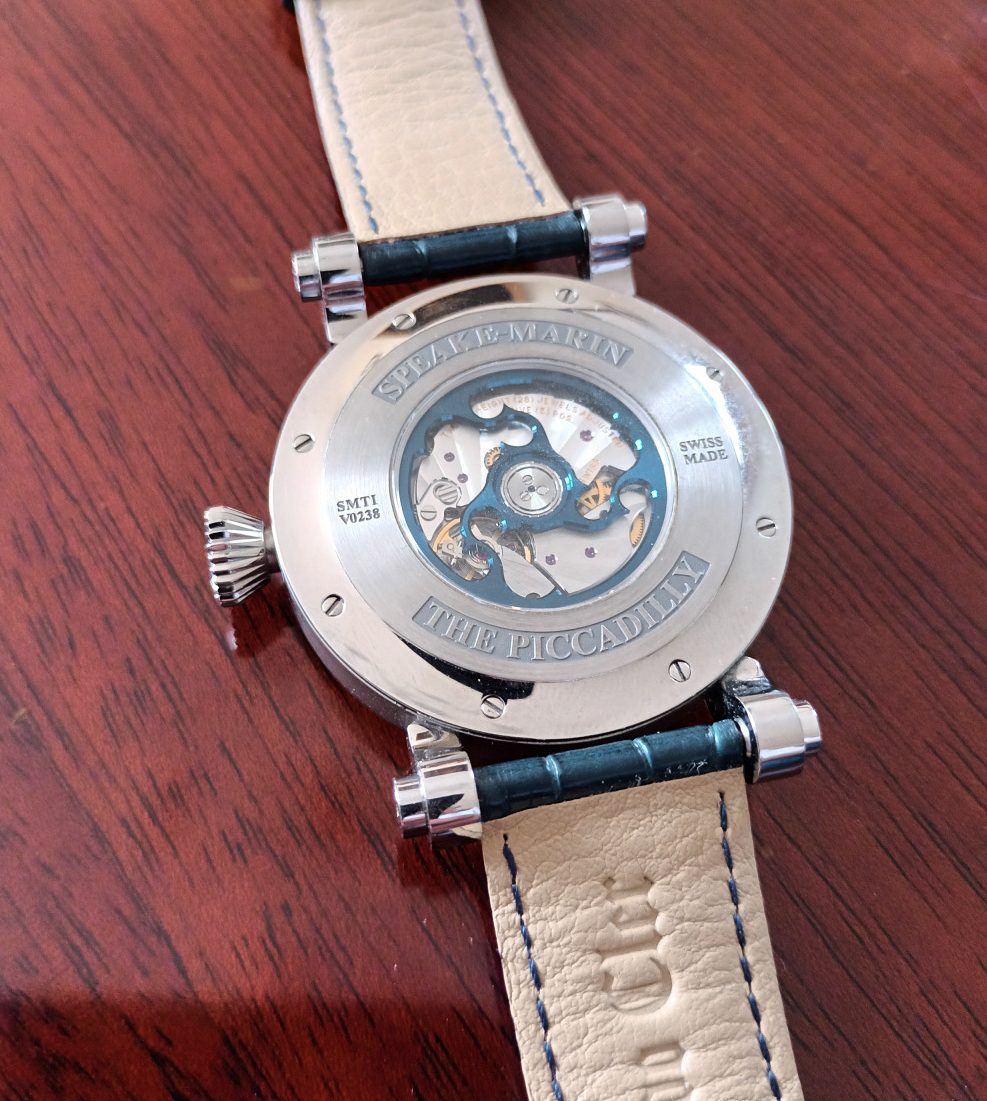 Flipping the watch over reveals a fairly modest window port, set within a chunky bezel secured by eight recessed flathead screws. The brand and model names are noted, plus Swiss Made and the serial number. Although not noted anywhere, the watch has some 30m of waterproofing.

Turning to the movement, this is a 3002 automatic calibre from Vaucher Fleurier and took over from the in-house Eros1 five day caliber – which I have subsequently discovered, allegedly had some reliability issues. The Vaucher is a pretty versatile movement, being able to facilitate (according to Vaucher) 2/3 hands with/without date. There are some 189 components with 28 jewels. The beat is 28,000 and power reserve a decent 50 hours. There are; two barrels which rotate in sequence in order to optimise operating stability and timing, a single direction rotor, and variable inertia with gold blocks. There is some decoration, with Cote de Geneve stripes on the three-quarter plate and balance cock. Atop all this is the blued rotor, copying the brand’s emblem so it is completely circular, and in this case skeletonised. As the window is fairly modest in diameter, the view is quite compressed. All of the mechanics are contained within a pretty slim 3.7mm height, thus affording a leaner 12 mm case height compared to the earlier version. Having visited Vaucher myself in 2019 (whilst on my Czapek trip. Ed), I can say I was very impressed with the people, facilities, and the end product. Although I was not focusing on this particular calibre at the time, I need no convincing over the quality, as of course they make primarily for Parmigiani no less. In fact they have the same parent – The Sandoz Group. Obviously there are modifications to the Vaucher standard – the date pointer hand, the rotor, and decoration being the most obvious ones.

Lastly, the watch originally came on a dark blue crocodile strap with a butterfly double clasp. As mentioned earlier, the watch I have came fitted with another strap – of almost the same colour, and with a S-M pin buckle. All are in pretty good condition and for the moment I will keep on the pin buckle. The watch in fact is a very comfortable wear, despite the case at 42mm is at my upper limit. 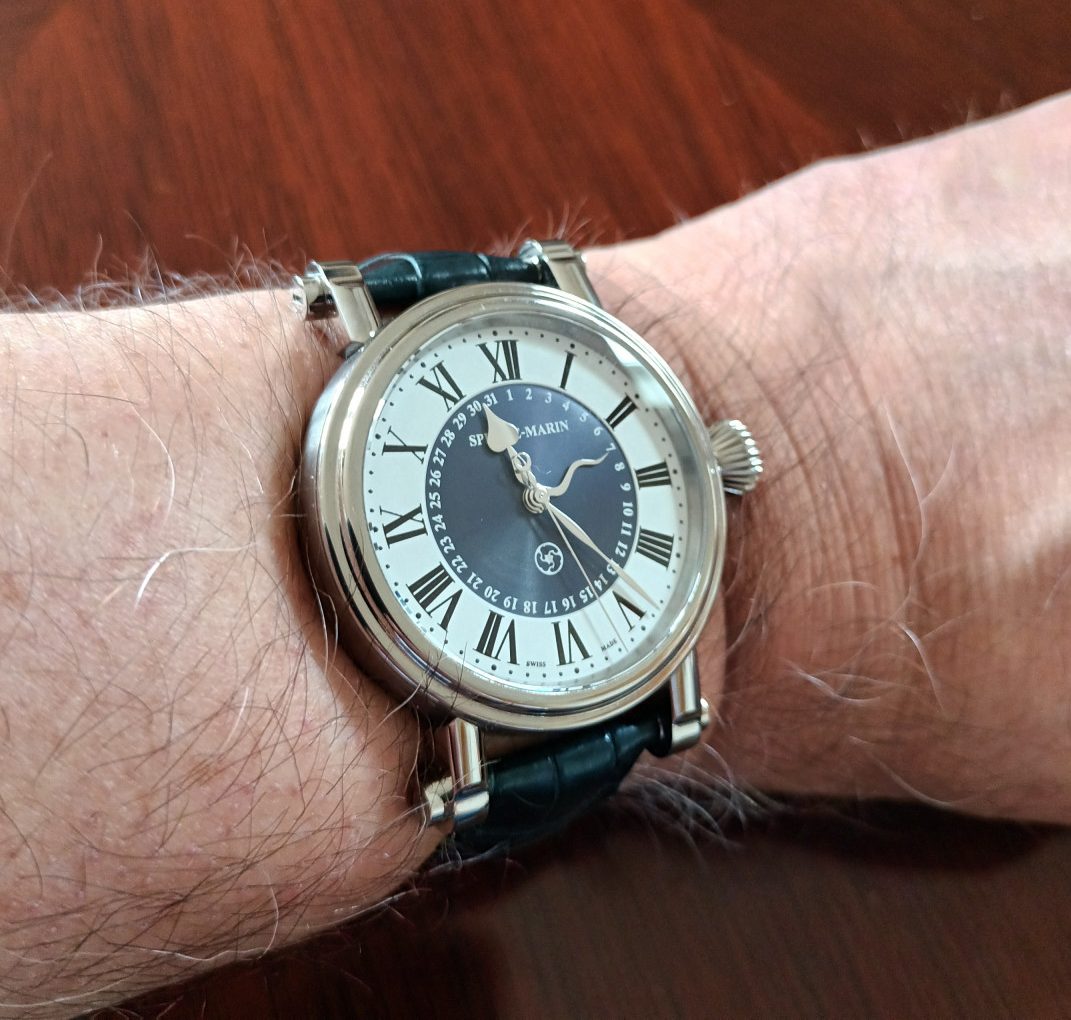 As usual in writing an article on a watch, it adds another dimension if one can actually communicate with the people who actually were involved in the design and manufacturing process. As such I did attempt to reach out to Peter/Daniela – via The Naked Watchmaker – as there was no other way I could see to do so. I explained that I had one of their great watches, and was after a bit more information over some  design aspects so I could further enhance my article. After a little delay I did receive an email from the latter – who had been taken up with attending W&W. It was perfectly polite, but said rather baldly that they could not assist at all as they were no longer involved in the business! I was naturally rather perplexed by this response, as it just seemed a little bizarre. As such I replied, and reiterated that I appreciated all this, but it was just for an article and that no details would relate to anything after they had exited the business – if that was the concern. I asked if she would kindly reconsider, but alas I heard no more! I have subsequently gleaned from various sources that allegedly there was falling out with other stakeholders about the direction the company was going. So, maybe that was the reason for the reticence and if so, that is such a shame. It would appear that a Mme Christelle Rosnoblet is the CEO etc today, and I think her family business may have been an original investor.

Anyway, with one route seemingly shut, I approached S-M direct (with case images showing ref numbers etc) with a request for information, plus asking if it may be possible to get a corrected certificate. I received a pretty swift and helpful response from their European Manager, Julien Ehrismann, saying that they would be happy to assist with any questions, plus they could provide a revised certificate. Happily, this has now all come to pass, including information on some new watches – including the new Ripples sports watch (which may be reviewed soon. Ed.)

My conclusions over the watch? Well, I think it is beautifully made, has great presence, and displays some bold features. I love the dial with pointer calendar, and the movement I know is beyond reproach. I am OK with the crown, but perhaps still a little bit wobbly over those lugs. I think, overall, they do suit the watch, but I would not have thought up such a design. But, what do I know? Also, for me, the case size could perhaps be a mite smaller – but using titanium does reduce the heft so generally speaking I really like the watch. As to price, well, I paid some £4.5K, which I feel represents good value for such quality – along with the pretty low volume of less than 100 in existence. So, in this case, I can like smaller independent brand offerings!!

Images: The Writer (unless noted otherwise)